Lease and enjoy up to 2 months free on select apartment homes.*

4th of July in Manhattan 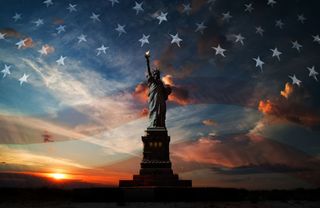 Ready for a rockin’ July 4th around the Manhattan apartments? New York is well-known as a bastion for big Independence Day parties and even bigger amazing fireworks displays, and today, we’ve compiled a few favorite options into one big list for you. Take a look, and see just where you might want to spend the fourth this 2019.

We’ll just get this out of the way now since it’s one of the most prominent reoccurring July 4th events out there as far as NYC is concerned — The Macy’s 4th of July Fireworks Show. Technically, this Independence Day spectacular takes place over the Brooklyn Bridge (not Manhattan proper), but it’s close enough, and definitely prominent enough to deserve a nod.

The fireworks show (Macy’s 43rd installment to date) will kick off at around 9:20PM, and will “launch more than 70,000 shells and effects from the bridge and from four barges positioned along the shores of Pier 17 at the Seaport District.” Accompanying the fireworks will be a riveting musical score, featuring “patriotic classics such as America the Beautiful and Stars & Stripes Forever, along with world-famous instrumentals from classic American films.”

Which films, you might be wondering? Expect to hear a few cuts from the soundtracks of Star Wars, ET, Casablanca, and other timeless masterpieces as the shells ring out above the East River. It’ll definitely be a loud (and highly patriotic) display, and a good way to spend the evening if you’re looking to get into the “rah-rah” USA spirit once Independence Day rolls around this year.

If you can’t make it right out to the Brooklyn Bridge to see the show, you can still take part in one of these parties around the city, from which you should be able to catch a glimpse of the fireworks at some point during the night. Either way, there’s no way you can leave the Macy’s Fireworks Show off your calendar, so don’t forget it.

Midsummer Night Swing at the Lincoln Center<.h4> For a slightly different “swing” on your July 4th Festivities, you can try checking out Midsummer Night Swing at the Lincoln Center. While you learn a bit about salsa dancing from talented instructor Carlos Konig, you’ll also be treated to the fine tunes of the legendary Bobby Valentín and his orchestra: “A true Fania all-star, the multi-instrumentalist bandleader and arranger Bobby Valentín is one of the most respected musicians on the Latin music scene, having collaborated from a young age with artists such as Celia Cruz, Tito Rodriguez, Ray Barretto, Charlie Palmieri, and more.” Midsummer Night Swing is all about getting New Yorkers out to mix and mingle, so what better time to hit the town than July 4th? There will undoubtedly be plenty of action, and with the electrifying magic of Independence Day in the air too? The sky’s the limit on how great a time you can have here.

There will be no shortage of rooftop July 4th parties this year, and if you’ve been to one before, you should know what to expect for the most part. Drinks, dancing, a DJ, maybe even a swimming pool for you to dip into and cool off. It’s all part of the rooftop experience, but prepare for the knob on these parties to be “turned up to eleven” in the midst of the Independence Day furor. Just a few options around town include:

They’re all likely to be a blast, but if we may be so bold, we’d suggest heading to the Elsie Rooftop if you only have the time to do one. It’s one of the most elegant spaces along Broadway, and being up 25 floors will give you some pretty spectacular views of the city (which will be buzzing with excitement on account of the holiday).

Try a 4th of July Cruise

Another prominent July 4th option around Manhattan is taking a lovely evening cruise and partying it up with other excited Independence Day revelers. The Skyport Marina has a few cruises heading out during the week of the 4th, including a few “pre-4th” cruises that will set sail on July 3rd, like the Blue Circle/Deep Root Records Annual Pre-July 4th Independence Day Yacht Party and the NYC Social 4th of July Eve.

What can you expect upon your 4th of July yacht adventure? These are similar to the rooftop parties, but you’ll be swapping the elevated setting for the New York rivers. The change of scenery won’t be accompanied by a change in elegance or luxury, though. Yacht cruises around New York, particularly those for Independence Day, are well-known for their high-class party atmosphere, which will also include plentiful food, drinks, and musical entertainment for your delight.

Or Maybe You Would Like To See a Play?

If you really want to mix things up for the 4th of July, you could try heading over to the Lincoln Center Theater for their Independence Day presentation of My Fair Lady. It’s only one of the greatest and most well-known musicals ever, and since they’ll be putting on the show in the afternoon, you’ll have plenty of time afterwards to catch one of those July 4th parties, along with the late-night fireworks displays.

If you’re looking to enjoy as much of July 4th as humanly possible, or as much of Manhattan in general, for that matter, you can’t go wrong living in stellar New York communities like 15 Cliff. Part of Manhattan’s famed “downtown renaissance,” these apartments, in addition to being superbly designed (with a modern lifestyle squarely in mind), put you right in the middle of all the city’s most amazing happenings, including many of those July 4th festivities. Come see what it’s all about. Take a peek at what 15 Cliff has in store, and make this your new choice for top-tier living in Lower Manhattan today. We can’t wait to welcome you to the community!