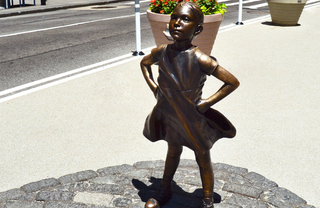 New York’s popular Fearless Girl statue is getting a new home, nestled below the grandeur of the New York Stock Exchange building and the splendid FiDi apartments:

“Downtown New York’s Fearless Girl statue, which has drawn crowds since it was installed last year staring down the Financial District’s Charging Bull sculpture, will be moved to a more permanent location outside of the New York Stock Exchange building sometime this year, according to a statement released by City Hall today (19 April).”

For backstory’s sake, you’ll recall that the 50-inch-tall statue, depicting a young girl standing akimbo and a defiant glare emblazoned across her face, was originally installed right at Broadway and Morris Street (opposite the Charging Bull) on International Women’s day in March 2017.

The statue, a collaboration between Uruguayan artist Kristen Visbal and Boston-based financial firm State Street Global Advisors, was “part of an initiative to increase the number of women on corporate boards.” Meant as a call to address what many see as unacceptable gender disparities among Wall Street, the statue’s placement was seen as a challenge to “antiquated corporate attitudes,” and did not go unnoticed:

“But the statue was not without controversy. The bull's sculptor, Arturo Di Modica, decried its placement, and some bashed it as corporate feminism.”

You’ll also recall when a small pug statue, urinating on the Fearless Girl statue’s left foot, was installed by Alex Gardega to provide something of a counterpoint:

“I decided to build this dog and make it crappy to downgrade the statue, exactly how the girl is a downgrade on the bull.”

Supporters of the statue’s placement saw the criticism as confirmation of their arguments: that female representation is still derided, that women aren’t paid duly for their efforts, that historic change is necessary to ensure equality. It’s still a hotly contested topic, but regardless, the Fearless Girl was installed as a reminder of the contentions of a large segment of Americans.

Now seen as a symbol of changing times and attitudes, the fine piece of guerilla artwork is receiving a more permanent home. You might recall some rumblings about a possible move earlier in the year, back during the statue’s first anniversary:

“Last month, it was announced that the popular statue, which made its debut on International Women’s Day in 2017, would become a permanent fixture, but it would likely be moved into a more pedestrian-friendly location.”

Why move at all? One concern cited by city officials was safety. In its current location, a median in Bowling Green, traffic is high and the busy street gets packed with pedestrian onlookers. It presents a significant challenge from a logistical standpoint, as those busy crowds often block the street, and, along with it, the traffic that would normally flow freely. According to Deputy Mayor Alicia Glen, a more welcoming place for those on foot would serve as a superior location.

But how to complete such a move while retaining the symbolism the statue is supposed to represent? By heading over to the New York Stock Exchange Building, naturally. Its classical architecture and status as the heart of American trade and capitalism make it the prime location for staring down corporate power — precisely what the Fearless Girl was made to do.

At least one person is pleased by the move. In a press release from April 20th, Congresswoman Carolyn B. Maloney (NY-12), one of the Fearless Girls staunchest supporters, stated:

“I’m thrilled that the Fearless Girl will have a long-term home in the heart of New York’s financial district.”

She went on to praise the Fearless Girl’s powerful symbolism:

“The Fearless Girl called attention to the severe lack of women sitting on corporate boards but she connected with so many women and girls because embodies the resiliency that each woman must possess to get ahead.”

But also lamented that it couldn’t remain in its original location:

“While I would have loved for her to remain in her original spot, public safety issues made that untenable.”

“The Fearless Girl statue has served as a rallying point for many New Yorkers and people from around the world concerned about gender equity.”

“The Fearless Girl and her message struck a chord and resonated with girls and women not just in New York but around the world, becoming an overnight icon.”

And even city council members Margaret Chin and Carlina Rivera:

“Fearless Girl is more than just a symbol of ‘what could be’ – she represents the powerful movement emerging today, as young women across the country rise up to fight for a safer, fairer world.”

The list goes on, and these are sentiments shared by many, but they also raise an important question: what will become of the Fearless Girl’s adversary, the Charging Bull? Over the past year, the two have become intertwined, to say the least, and without her rival, the statue does lose a bit of pizazz.

While the Fearless Girl is set to be moved by the end of 2018, there are currently no plans for changing the location of the Charging Bull. It might happen, as Mayor Bill De Blasio, through a spokesman, has indicated that it is “important that the Fearless Girl be in a position to stand up to the bull and what it stands for,” and that the city is “aiming to keep them together.”

The Charging Bull’s artist, Arturo Di Modica, however, might not be amenable to the idea and could stage a legal battle to block a potential move, keeping the bull in its nearly 30 year home.