A Day At The New York Harbor 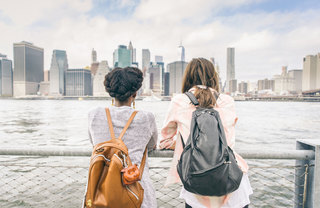 Any longtime resident of New York and the Wall Street apartments would be able to tell you that the waters around Manhattan haven’t always had a reputation for being the cleanest. In fact, you might even say those waters were downright disgusting at one point, a casualty of the city’s cultural, economic, and industrial advancement:

“New York’s Hudson River, once known as America’s Rhine in a nod to the famous European waterway, played a pivotal role in bolstering American power at the cost of decades of foul pollution.”

That’s all starting to change, however. According to a recent report from the New York Post, the New York Harbor is cleaner than it’s been in over a century. What sparked such a drastic change? That’s exactly what we’ll be taking a look at today, as we “dive” into what has these waters rebounding so starkly.

As the story goes, New York’s waters, during the times that European Colonists first started arriving in the area, were pristine — a natural paradise the likes of which they had never seen before.

Fast forward a few hundred years, though, and industrial progress would see these waters polluted, and many of the natural inhabitants that once called the Harbor and the Hudson home, like oysters, sturgeon, and the occasional whale, would seemingly vanish.

Now that’s started to change though. In part due to stricter controls on what can be dumped in the harbor, how water is treated, and several other government-led initiatives designed to clean up the water. That’s only part of the equation, however, and the actions of New York’s citizens have also played a huge part in the Harbor’s comeback.

The reintroduction of oysters, for instance, through the Billion Oyster Project, has helped restore 28 million oysters and 12 reef sites around the New York Waters since 2014, and aims to “re-establish 1 billion live oysters in the harbor by 2035.”

If you’re wondering why that’s so important, consider this: just one oyster can clean upwards of 50 gallons of water every day. Over time, an abundance of oysters can make a significant impact on the health of the waters around Manhattan, and help ensure cleaner waters for future generations. Who knows, maybe those waters will be clean enough to produce some edible oysters at some point down the line?

Regardless, the harbor has already made significant strides in its rejuvenation, and the efforts of New Yorkers like Pete Malinowski (who helped kick off the idea of re-establishing oysters in the waters) are all going a long way in restoring the once-pristine nature of this natural wonder.

As the waters around Manhattan transform for the better, so too do areas like downtown, where you’ll find the splendid residences at 15 Cliff. The so-called “downtown renaissance” has seen neighborhoods like the Financial District make arguably as big a splash as the surrounding waters, making now the perfect time to join this stellar NYC community. Learn more about what awaits at 15 Cliff, then prepare to make this your new paradise on the beautiful island of Manhattan.