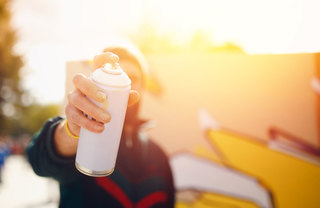 If there's one thing the Big Apple has a reputation for, it's amazing graffiti artwork. You don't have to travel far from most Manhattan apartments to find an impressive display of creative talent in that regard, to the point where New York is often placed at the pinnacle of round ups detailing great graffiti throughout the country. What about New York City specifically, though? Have you ever wondered where some of the most well-regarded works of graffiti art are throughout the city? While we might not be able to catalog every masterpiece you'll come across, we can certainly point your attention to some standout works of art you'll find on the walls of the city.

Big Pun (real name, Christopher Rios) was a pioneer in the rap game, and a New York City icon who revolutionized the art form. Though he passed in the year 2000, you can still see a tribute to his greatness if you head to Rogers Place in the West Bronx. It's a touching nod to this legendary figure, created by Bronx Graffiti artists Tats Cru. They even take the time to refresh the memorial each year on Pun's birthday — November 10th.

Head to East Houston Street, and you'll come across a massive wall of graffiti, commonly referred to as the Houston Bowery Art Wall. As the name suggests, there's a grand synthesis of various works that reside here, and each is impressive in its own right. The featured artwork changes regularly, so you can always head here with the expectation that something new and exciting will appear, eventually!

The Graffiti Hall of Fame

We can't talk about graffiti in New York City without throwing a mention to the Graffiti Hall of Fame. You'll find it in Harlem, and when you visit, you'll find that it's decorated with some of the most inventive and visually impressive graffiti work you've seen to date. The artists on display varies as time goes on, but the reputation for high standards and deep expression remains the same.

There's even a fair amount of Banksy artwork on the New York City streets, like the Hammer Boy Mural over on West 79th Street. It's simple, understated even — being an all black silhouette against its beige background — but folks still debate the meaning, and it's definitely a treat to look at while you're traversing the streets.

See the Sights Around These Manhattan Apartments

New York City is a place of culture and wonder. You can see a great deal of what the city has to offer when you're a part of amazing communities like 15 Cliff. Being situated right in the heart of the Financial District has its perks, and you'll enjoy the lot of them once you get settled into the neighborhood. It's hard to top the high life in New York City, so if you're ready to make a move to a superior Manhattan abode, be sure to learn more about what awaits at 15 Cliff, then reach out to discover how you can score one of these fantastic residences for yourself.