Facts On The Brooklyn Bridge 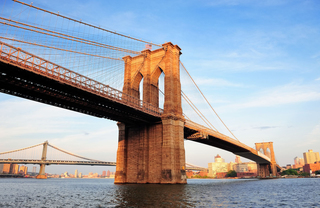 Turn your gaze southeast of the luxury apartments in Manhattan and you’ll see one of the city’s most enduring landmarks -- the Brooklyn Bridge. Opened to the public on May 24th, 1883, the “Eighth Wonder Of The World” isn’t just a marvel of human engineering and a tantalizing sight to behold -- it has long served a practical purpose, connecting Manhattan island to Brooklyn, an unheard of feat before the bridge was completed.

Every New Yorker knows about the Brooklyn Bridge and most have crossed it at least once, but how much do you know about the stories behind it? The lesser spoken of details that, while obscure, remain interesting for both history buff and common man alike? If you’re looking to learn a bit more about these rare facts, read on, as we delve into the secrets of the Brooklyn Bridge you may (or may not) have known.

Even at the time of the 1883 dedication it was referred to by a more official-sounding name, “New York And Brooklyn Bridge.” After Brooklyn became a part of New York City and Brooklyn area pride saw an uptick, though, the name was officially changed to the “Brooklyn Bridge” in 1915.

The Brooklyn Bridge Was Facilitated By Corruption

Like any monumental city project, construction of the Brooklyn Bridge required the support of local politicians. In this particular case, one man, William M. Tweed, more commonly known as “Boss” Tweed, was the corrupt politician with the clout to make it happen. You might have already heard of Tweed and his other dirty dealings as the head of New York City’s Tammany Hall political machine.

Much as he had done with other city projects, Tweed latched onto the bridge project, buying favors (at a cost of $65,000) in hopes of holding stock in the bridge and profiting by skimming from construction contracts. His grand scheme failed, as he was jailed before he could see it to fruition, but the backing for the bridge he bought from other politicians did help kick the project off the ground.

The Mind Behind The Brooklyn Bridge Died During Its Construction
The idea for the Brooklyn Bridge came by way of its Chief Architect, John Roebling. While overseeing the construction and taking measurements, his foot was crushed between some pilings and a ferry. A hardy man, Roebling didn’t scream, or so rumor goes, and instead went back to his task of delegating to his workers.

He even declined his doctor’s orders to have his toes amputated, as he believed all the aftercare necessary post-procedure would be to tedious. That toughness, unfortunately, did Roebling in, as he developed tetanus just a few short weeks later and, sadly, passed away before seeing his master work come to fruition.

As Did Many Other Workers

Roebling wasn’t the only one whose life became forfeit during the construction of the Brooklyn Bridge. Though the exact figures are unknown, the estimate is that 20-30 men died during the project. Some fell from the tall towers of the bridge, dying on impact with the ground. Others were killed by debris falling from on high.

Workers also fell victim to “the bends,” a common scuba diver affliction, and what they referred to as Cassion’s Disease at the time. Working deep underwater and then surfacing without proper decompression caused “dissolved gases (mainly nitrogen) come out of solution in bubbles and can affect just about any body area including joints, lung, heart, skin and brain.”

John Roebling’s son, Washington Roebling, was intent on seeing his father’s work through to the end after his demise. Like his workers, he too spent a good deal of time underwater, and like many of those workers, he too developed the bends. He didn’t die, but the severity of his condition was so great that he was bedridden, and had to watch the construction play out from his Trenton, New Jersey home. Interestingly enough, this led to some of the bridge’s feminist connotations.

You see, once Washington was out of action, his wife (after persuading the president of the New York Bridge Company) took over as chief engineer. Though not an engineer herself, she understood the plans and designs just as well as her husband, and was perfectly-suited for the role. She received a nod during the dedication ceremony for the bridge, and even has a plaque dedicated in her honor, along with Washington and John Roebling. The touching quote says it all: “back of every great work we can find the self-sacrificing devotion of a woman.”

The Price Tag Was Hefty

Beyond the cost in human lives and the long development time -- 14 years -- the monetary cost for the bridge was also immense. At the time, it cost $15 million to complete. Adjust that for inflation, and you’re looking at a whopping $3.5 billion dollars. That’s twice the amount of time and money than was expected, and, as you might imagine, the bridge project was built at a debt.

In part, though, that debt was paid for by another interesting bridge fact -- the underground wine cellars on the bridge’s Manhattan and Brooklyn sides. The builders rented these out for a yearly fee -- $1,000 in Manhattan and $500 in Brooklyn. These eventually closed in the 1930s, and remain inaccessible today.

Next Time You Look Out From The Luxury Apartments In Manhattan

Make sure you turn your attention toward the bridge and take note of the splendor, all the while reflecting on some of those interesting facts. You’ll be in the perfect spot to do some relaxed pondering, as upscale buildings like 15 Cliff provide some of the most spacious and comfortable residences you’ll find in the city. For a downtown experience like no other, be sure to check it out.