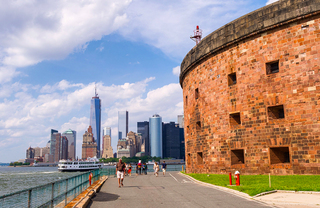 If you live in and around New York City in financial district apartments, you may be missing out on an exciting opportunity to visit the Governors Island National Monument. Many people unfortunately overlook the historic value of this enchanting place and fail to appreciate the beauty and splendor that it provides this wonderful city.

Believe it or not, there is a great deal of history and culture in the area. There are lots to learn about the park itself as well, and there are many exciting events taking place on Governors Island that you may not even know about. So, instead of participating in your normal day-to-day activities or going about your regular weekend activities, you may see the value in visiting the Governors Island National Monument to get to know more about this exciting place. And as a New Yorker, you will really appreciate the rich cultural history that it provides.

Before we talk about some of the current activities and things taking place on Governors Island in the present, we would also like to take a look at the history and culture of the island. If this sounds even remotely interesting to you, please stick around to find out more about this unique and interesting place.

The History & Culture of Governors Island

You may not even realize this, but Governors Island is right in the heart of Manhattan. What we mean is that it’s only a couple hundred yards away from the southern tip of the city of Manhattan, and it meets at the confluence of the East River and Hudson River in New York Harbor.

This island is fully fortified by Castle Williams and Fort Jay, and when it was originally put to use, it was set up as a way to protect New York City as one of the earlier outposts in case enemy naval ships ever came into the harbor to attack the financial district of New York City and other areas in Manhattan.

Castle Williams and Fort Jay were initially erected in the late 1700s and early 1800s, more specifically 1796 and 1811 respectively. These two bastions of American ingenuity were designed and became a part of the First and Second American Systems of Fortification, which were specifically put into place to help protect the United States of America from enemy combatants from around the globe.

Governors Island was originally put into action as a military outpost. But it was later turned into one of the major US Army command headquarters from 1794 until 1996, for a total of 202 years. From 1966 to 1996, it became the home of the US Coast Guard’s Atlantic area command, and is one of the most complex and largest installations currently of its kind in the entire world.

Currently, Governors Island is open and available to the public, but only on a seasonal basis. The facilities and public services are currently operating on a limited basis, but it is possible to visit the island. We highly recommend checking out their website to learn more.

What Are You Allowed to Do When Visiting Governors Island?

For the most part, when you decide to pay Governors Island a visit, you are particularly going there to take a number of guided tours. The great thing about these tours is that they’re hosted by the National Park Service, which means you do not have to pay anything in order to enjoy these historic monuments to the fullest.

That’s right, the National Park Service does not charge anything for those looking to take a walk around the island, visit Fort Jay, visit Castle Williams, or take a stroll through the Ye Old Ball & Chain Gift Shop and Bookstore, which is located in Castle Williams for all to enjoy.

With that said, we’ll now take a look at some of the tours that everyday ordinary people are allowed to go on during the spring and summer months when these tours are available. You are not allowed to tour these areas during the colder, snowy, winter months, because they just aren’t available at that time.

This tour takes you through Castle Williams, which is the current centerpiece of the fortification system that was designed to protect and guard New York City before the war of 1812. For a long time, this area was off-limits to the public, but a rehabilitation project spearheaded by the National Park Service made it possible to open the castle to the general public again in 2011.

When you go on the tour, you will be able to go through three levels of the castle and you can also gain access to the roof. They do not allow anyone on the upper floors of the castle without a ticket, so make sure you have one handy in order to access these areas. Remember, the tours are free and tickets can be picked up right inside the castle.

This is really interesting because you get to go on a tour of one of the coolest, classic star-shaped forts in the entire United States. In fact, this fort is actually one of the oldest structures on the entire island, and it has been in existence since 1796.

The tour guide will tell you about the history of the fort, how it was used to protect New York City, and more. So if you ever wanted to learn about Governors Island and its rich cultural history, the Fort Jay tour is definitely worth your time and attention.

15 Cliff is one of the best luxury apartment buildings in the heart of the financial district in New York City. Their amazing floor plans show you just how spacious these apartments can be, and the top-notch amenities make this one of the best places to live in Manhattan. Check out 15 Cliff today to learn more.