Grab A Quick Lunch In FiDi 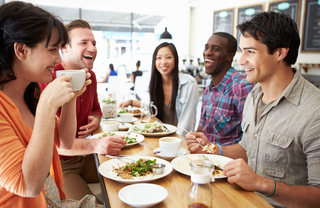 There’s no denying that FiDi is a neighborhood that fits the definition for both “hip” and “happening.” This section of Manhattan is where the buzz of Wall Street is permeable in the air, but there are also plenty of quaint and pedestrian areas that provide the sort of “authentic” city experience many crave. As The New York Times once put it, it’s a “Neighborhood With Two Faces.” Financial District rentals provide residents with the high class luxury and quality living in the city should mean to them, while the range of offerings, particularly when it comes to grabbing a bite to eat, offer a level of charm and convenience that you might not consider typical for a place that also serves as a city’s mammoth economic heart. So, if you’re looking to just pop in somewhere for a casual lunch in this southern-most sector of the island, where would you go? We’ll take a look at some standout options to add to your growing list of favorites.

And choices abound. After you’ve gotten yourself familiarized with the neighborhood a bit, you might start wanting to expand deeper into your pool of quick lunch options. Both Infatuation and Business Insider have taken a look at the myriad places that have popped up in what, as BI terms, used to be a ghost town for any sort of interesting eats, ranging throughout all the kinds of cuisine you might crave. We’ll delve into a few of these, along with what you can expect (and what you might find interesting) dotting the menus of these fine establishments.

While the name might raise an eyebrow or two, the service and selection at The Dead Rabbit on Water Street will dispel any negative notions you might have about this combination establishment. It’s both a cocktail bar and restaurant (though, for a quick midday meal, you might be more interested in just grabbing a bite to eat) and the atmosphere is decidedly New York. According to Infatuation:

“The space feels very old New York (like, 1700s old), and many of the cocktails are served in fancy little teacups. Did New York’s settlers drink whiskey out of teacups? Unclear, but we’ll take it.”

The Dead Rabbit’s unique story adds to its charm. When veteran bartenders Jack McGarry and Sean Muldoon teamed up, they did so with the vision of creating a Irish-style cocktail/restaurant space in NYC like no other. It took them several attempts, but they finally managed to get The Dead Rabbit off the ground, and it’s grown into one of the Financial District’s finest hotspots.

The Dead Rabbit has won numerous awards, and they’re not shy about sharing that fact. They were voted “Best Bar In North America” 2013-2016, and received a “World’s Best Bar” Award in 2016. With accolades like they, you can rest assured you’re in for quality.

You’re out for a quick lunch, correct? What could be quicker than popping in for a slice of pizza or a burger? At Brookfield Place on Vesey Street, you’ll find Hudson Eats, the large food court with those and many other options. Within the confines of this space, you’ll find a Parm, SKinny Pizza, Chop’t, and several other food offerings that will surely cover your cravings. As a fast lunch option, few other offerings can beat a food court, and this one delivers in style and within your price range. According to NYMag’s profile on the place:

“The crowd at this cafeteria on Brookfield Place’s second floor is mainly Goldman Sachs interns working late and well-heeled Battery Park parents with their kids; all the same, the relatively inexpensive dining options are hard to beat in the area — and the views of the Hudson River, from ample plush seating, aren’t shabby either.”

There you have it. Lunch food fit to satisfy at a good price, combined with some backgrounds and scenery that add a touch of FiDi class to a quick meal. Don’t forget to top it off with a delectable cupcake from Sprinkles or some scrumptious pastries from Financier Patisserie.

Since you’re in the Financial District, why not lunch at the Westfield World Trade Center? Eataly has a second location here and it’s just as fabulous as its partner site in the Flatiron District:

“This new 45,000-square-foot space has a mix of market-style shopping, counter dining, and traditional restaurants.”

Which restaurants are those, you might ask? You’ve got a few options to choose from, including Vino E Grano, Le Stagioni, and La Pizza & La Pasta, but the prime pick is widely considered to be Osteria Della Pace:

“Inspired by the cuisine of southern Italy, Osteria della Pace offers an upscale dining experience focused on Italian simplicity. The restaurant’s separate dining room offers privacy from the main experience of Eataly while still accentuating the authentic, emotional connection to Italian culture and cuisine for which Eataly is known.”

The lunch menu here contains what you might expect from a classy Italian joint, stocked full of different antipasti, pastas, risottos, meats, fish, and more. Instead of waiting for hours on end for entry, though, you’ll be able to quickly secure a lunch table and get on with your day once your meal is through.

While you’re at Eataly, though, you might want to score some extras for the road, of which they provide plenty. Eataly has a number of top-quality products for sale, all of which will make your homemade meals that much nicer. From pastas and condiments to delicious candies and more, you’ll be able to stock your kitchen with more than enough items to make meals come alive.

Take up residence in fine communities like 15 Cliff, and all of these quick lunch spots are well within reach. Not just those, though, but everything that the Financial District has to offer — shopping, entertainment, transportation, nature — all you might require is at your fingertips. With amazing residences and equally impressive amenities, 15 Cliff distinguishes itself as a premiere rental space with few comparisons. Take a tour of the grounds. Once you see what 15 Cliff is all about, you’ll be hard pressed to find anything else that catches your eye in amazing downtown Manhattan.