NYC: Best City to Get Pizza 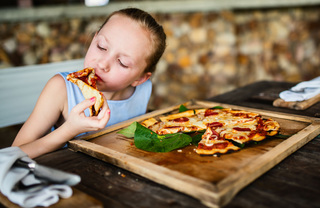 Now here’s something most of us can agree on: no matter which of the multitude of apartments for rent in Manhattan you call home, you know that New York, New York is the best city in the world to grab a slice of pizza. You’ll find article after article strewn about the web as to why this is the case, but regardless of which you subscribe to (or which, in fact, is truth), the fact remains that NYC remains the king of pizza pie.

Even TripAdvisor noted this in their recent analysis of review data. So, what makes New York the world’s champion when it comes to putting cheese, sauce, and toppings on baked bread, and where can you find some of Manhattan’s finest? That’s exactly what we’ll be exploring today, as we break down New York’s success at the art of the pie, and fill you in on some of the best pizza joints in town.

There’s probably one theory you’ve heard of — that the secret to New York Pizza is in the unique tap water:

“It’s something in the water…or at least that’s what they’ll have you believe. One of the oldest theories about New York City pizza is that the city’s tap water is responsible for its superior taste.”

That’s one of the oldest myths, but according to Food Republic, it doesn’t quite “hold water,” as it were, since pizza places outside of New York that use New York water in their dough don’t quite nail the taste:

“It’s easily debunked the moment you realize that Domino’s Brooklyn-style pizza is probably a better approximation of New York pizza than Lamonica’s, no matter where they might get their dough from.”

So what’s the secret, then? There are plenty of other reasons, like the fact that many New York pizzerias use unique ovens when baking their pies. These are some of the oldest pizza ovens in America, and as Eat Up points out, their repeated use only adds to the amazing taste of New York pizza:

“Just like a steel pan gains flavor from each time you cook in it, these old pizza ovens have captured particles from the many pizzas cooked in them over the years. They then add some of that flavor to each new pizza cooked. Pizzerias who have newer ovens simply miss this flavor.”

Sometimes, it seems, being the oldest game in town is of great benefit, but there’s pushback on this theory. Drawing again from Food Republic, Cornell University professor Gavin Sacks explains that this claim about ovens is a bit dubious:

“You’re more likely to get residual taste when you’re dealing with contamination. If you use a soap and don’t clean it up all the way, the pizza you cook will probably taste a bit like the soap you used.”

So maybe yes, or maybe no on the oven theory, but regardless, even this explanation is only part of the equation. You also have to consider two more variables that are far simpler in nature: ingredients and technique. New York pizzerias often use the finest ingredients, straight from Italy, and when those are turned into pizza by masters with decades of pizza making knowledge (which itself was passed down from masters far older), the only outcome you’d expect would be a great tasting pizza.

But there’s one more possibility to consider yet. It could simply be that the reason New York has such pizza is the fact that there’s no end of competition in the Big Apple, and eventually, someone was bound to get the recipe right:

“The fact that we have pizza joints on almost every corner just may be the main reason we have any good ones at all. With over 100 years of pizza tradition, inevitably some chefs will produce a remarkable slice.”

No matter the specific reasoning, though, New York remains king of the hill when it comes to great pizza. You’re welcome to contest this claim, for certain, but make no mistake that there are millions who would argue the point until the cows came home.

Where You Can Find the Best in Manhattan

If we’re going by TripAdvisor’s rankings, then the top of the heap when it comes to famous New York-style pizza is Bleecker Street Pizza on 7th Avenue. More than 1,000 reviews to date, and more than 90% of those rank the spot as “Excellent” or “Very Good.” It holds the #20 spot out of more than 10,000 New York restaurants rated, so that’s got to count for something. It’s not the only pizza spot in town, though, and you’ll find plenty of lists with their own criteria for who should wear the pizza crown.

Food Network, for instance, lists Speedy Romeo as the reigning champ, with Emily, Lombardi’s, L&B Spumoni Gardens trailing behind as top contenders. Thrillist, on the other hand, issued a Top 7 List back in 2014, which ranked the best spots (in order) as: Roberta’s, Mortino, Paulie Gee’s, Di Fara, Franny’s, Best Pizza, and Joe’s Pizza. For an alternate take, though, check out Delish’s list of The 20 Absolute Best Pizzas In NYC, which took the time to scope out the best individual pizza offerings across restaurants.

Now matter where you go, however, the point is this: you’ll find no better pizzas than the ones you’ll come across in New York City, so if you consider yourself a pizza lover, this is the number one city to call home.

We’re talking, of course, about communities like 15 Cliff, where all the finest things that Manhattan has to offer are right at your fingertips. This amazing apartment building, situated right in the luxurious Financial District, brings the best of the city straight to you — and there’s plenty for you to discover. Want to make this sort of lifestyle your everyday on the island? Be sure to explore all that 15 Cliff has to offer, then reach out to learn about availability and making this your new Manhattan home.