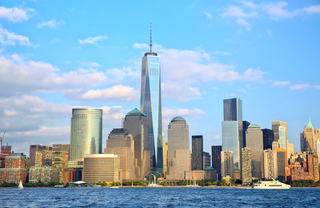 It's been 16 years since the original World Trade Center was destroyed on 9/11. In the years since those terrorist attacks, though, the area has seen significant revitalization, attracting growth and change at a rapid pace. There's a new tower, new financial district apartment buildings, and new life permeating through recently reconstructed towers. How has this change progressed through the years? What of The World Trade Center's present and future? We're going to delve into some of the evolution of this important site, along with some things you might not have known about the buildings themselves.

There were a few key figures involved in the reconstruction of the World Trade Center. One of these was Larry Silverstein, the founder of Silverstein Properties. Just six weeks before September 11, his firm signed a lengthy lease for the twin towers, and their destruction prompted him to take significant action in the rebuilding efforts.

Silverstein wants to see the entire site returned to its full glory within his lifetime, as it's become his overwhelming focus at this latter stage in his life. He describes this in a recent interview with AM New York:

"I have now been at this, the rebuilding, for the last 16 years of my life. So it’s been the passion of my life. We’ve come a very long way. You can see the buildings that we’ve erected down here."
He describes how he felt an immediate need to act after 9/11:

"Very quickly after 9/11, I just in my mind concluded that we needed to rebuild the trade center to defeat the terrorists and their attacks — what they sought to do to us on 9/11."

He also goes on to note that the World Trade Center that exists today, in his mind, is an improvement on what came before:

"I hope that they would realize we strived long and hard to accomplish what’s here...It’s a vastly different product, and a far better product, than existed down here before 9/11."

He's got good reason to think so. A look at the work his team has accomplished is a sight to behold. 7 World Trade Center, for instance, is considered a marvel of contemporary architecture. Designed by architect David Childs, the building received both "the Municipal Art Society of New York's 2006 award for Best New Building, and the 2006 Merit Award for Architecture from the American Institute of Architects New York Chapter."

4 World Trade Center is billed as the "the most advanced office building of the 21st Century." A minimalist take on modern building style, architect Fumihiko Maki described it as "a catalyst for activating the surrounding urban streetscape as part of the revitalization of lower Manhattan." On top of housing some of the best shops and restaurants in New York, along with some high-level business tenants, the building provides direct access to "virtually every city subway," a boon for those that like to take the train.

3 World Trade Center is expected to open in the first half of 2018. The building, designed by architect Richard Rogers, includes a "reinforced concrete core with steel structure outside the core, and clad in an external structural steel frame." The proverbial "cherry" on the top of this structure will be a three-story high lobby that will give visitors a grand view of Memorial Park, which rests outside.

The crown jewel in The World Trade Center's rebirth is One World Trade Center, "the shining beacon for the new Downtown." It stands 1,776 feet tall (the tallest building in the Western Hemisphere), capped with a 408-foot spire at the top of the building. Architect David Childs designed it with a base "identical to the original Twin Towers," and with a large observation deck, One World Observatory, that sits 1,250 feet above the street.

Perhaps lesser-known among the reconstructed buildings is the St. Nicholas Greek Orthodox Church. Recently profiled in Curbed, the new site, designed by architect Santiago Calatrava, will be known officially as the "St. Nicholas Greek Orthodox Church and National Shrine at the World Trade Center." The rebuilt church will be just that, but also a "place of interest for visitors and as a nondenominational bereavement center." For all the glitz and glamour of the impressive new towers that the World Trade Center Complex is now home to, there's still a place for soul, contained within the walls of the church's updated design:

"The design for the new St. Nicholas is inspired by the Byzantine churches Hagia Sophia and Church of the Holy Savior of Chora, both in Istanbul."

The World Trade Center isn't the only part of the Financial District that has been given an upgrade. Fabulous rental properties like 15 Cliff perfectly embody what Downtown Manhattan is all about. The apartment's premiere location, spacious floor plans, and contemporary amenities come together to create the perfect setup for city living. Take the tour, and be ready to inquire about your new spot in the new Manhattan.