Urban Art and Culture in FiDi 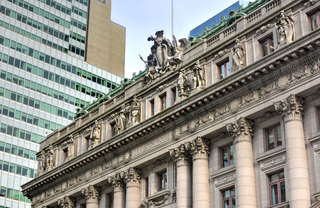 Given an extensive and rich history as one of the oldest and longest standing locations in America, the Financial District is teeming with a unique culture and a style of urban art all its own. From the 15 Cliff apartments to the top of Manhattan itself, nearly every inch of NYC has a story to tell.

This area has been home to many cultures and heritages, all of which have been preserved in the extensive collections found at the various museums in the area. Dating all the way back to its earliest inhabitants, the National Museum of the American Indian features displays artifacts from the Native Americans that inhabited these lands, especially the Iroquois tribes.

The Museum of Jewish Heritage displays prominent pieces from one of the dominant religions in the area's history. Meanwhile, the Museum of American Finance chronicles things like Wall Street and the United States' economy. If you are interested in the cultural history of New York during periods from the Revolutionary War onward, then the Fraunces Tavern Museum's exhibitions are the perfect place to learn more.

Once named "Liberty Park", this location was heavily damaged by the events of 9/11. Reopened to the public in 2006, it now features two of the city's most iconic sculptures.

The first, J. Seward Johnson's "Double Check", is a bronze statue that depicts a businessman looking inside of his briefcase. It has become a symbol of resilience after surviving the wreckage from the World Trade Center, but has forever stood as a highly relatable depiction of New York life.

The second is "Joie de Vivre" by Mark de Suvero. Standing 70 feet tall and constructed of red beams, the idea behind this sculpture is to remind us of the things that make life joyful. Despite the high levels of stress and even disaster that New York has faced from its early beginnings to more recent events, it isn't hard to find a smile on anyone's face here in The Big Apple.

More relatable to modern times, this monument stands as a testament to New York and America's resilience as well as a dedication to the horror suffered and lives lost on that fateful day. It consists of two reflecting pools, The Oculus designed by Santiago Calatrava, and the gorgeous Freedom Tower.

Perhaps one of the most famous pieces of art in the city, the Charging Bull represents the strength New York residents showed despite the stock market crash of 1987. Weighing a whopping 7,100 pounds at 11 feet tall and 16 feet long, this aggressive yet captivating statue sits right at the hearts of the financial district.

This 238 year old park remains one of the most iconic parks in New York City today. Created in 1686, this park has seen the building then tearing down of a King George III statue for ammunition in the Revolutionary War, a slew of different owners from priests to corporations, and the construction of its fountain which was donated by George T. Delacorte.

This beautiful location offers New Yorkers a quiet retreat from their hectic days as well a hotspot for tourists looking to take gorgeous pictures for their vacation album.

These two churches are historic testaments to colonial times as well a part of the religious history this area holds. St. Paul's Chapel sits in the shadow of the Freedom Tower, and has become a symbol of strength here in New York with the two sharing a piece of history.

Trinity Church had burnt down in the Great Fire of 1776, but St. Paul's remained standing with only minimal damage. This lead to several prominent historical figures, including George Washington himself, to attend St. Paul's during Trinity's rebuilding. St. Paul also became a sanctuary of relief for recovery workers in the following months after 9/11. Today, it offers historical programs, art classes, and a social justice outreach program alongside its usual sermons.
Trinity Church has been a part of this area for over 300 years. Much like the city itself, Trinity has experienced a slew of setbacks and problems but has always rebuilt itself and emerged stronger than before. It's graveyard is equally historical, acting as the final resting place for historical figures dating all the way back to the Revolutionary War.

This chain of restaurants got its start right here in the Financial District on South William Street in the late 19th century. Quickly establishing itself as one of the top fine dining establishments in America, that title still holds true to this very day. Ever progressive just like New York, this was one of the first eateries to feature a menu customers could select a meal from as well as separate wine menu.

It is also well known for inventing the Delmonico Potato and offering the renowned Delmonico Steak. However, the most influential creation from their kitchen was the Wedge Salad. If you've ever had one of these tasty takes on the traditional lettuce bowl, then you know how delicious they can be and now know who to thank for their inception into the food industry.

All of these prominent aspects of art and culture reflect the nature of New York itself. However, they are only a fraction of what this area has to hold. Those looking to place themselves in the heart of the historical Financial District are invited to experience the new homes at 15 Cliff.

This first rate residential community features stylish studio, single, and two bedroom chic apartments. With spacious layouts and top rated amenities, there's no better way to experience the rich tapestry of this vibrant location. Fine dining, premier shopping, and the best entertainment NYC has to offer are just blocks away.

The landscaped rooftop deck offers stunning views of the city skyline while the fully equipped fitness center and onsite cafe cater to active lifestyles. A close location to various subway lines offers easy access to the rest of the city as well as work, and to top it all of these homes are pet friendly. Come experience Manhattan in a whole new light here at 15 Cliff.